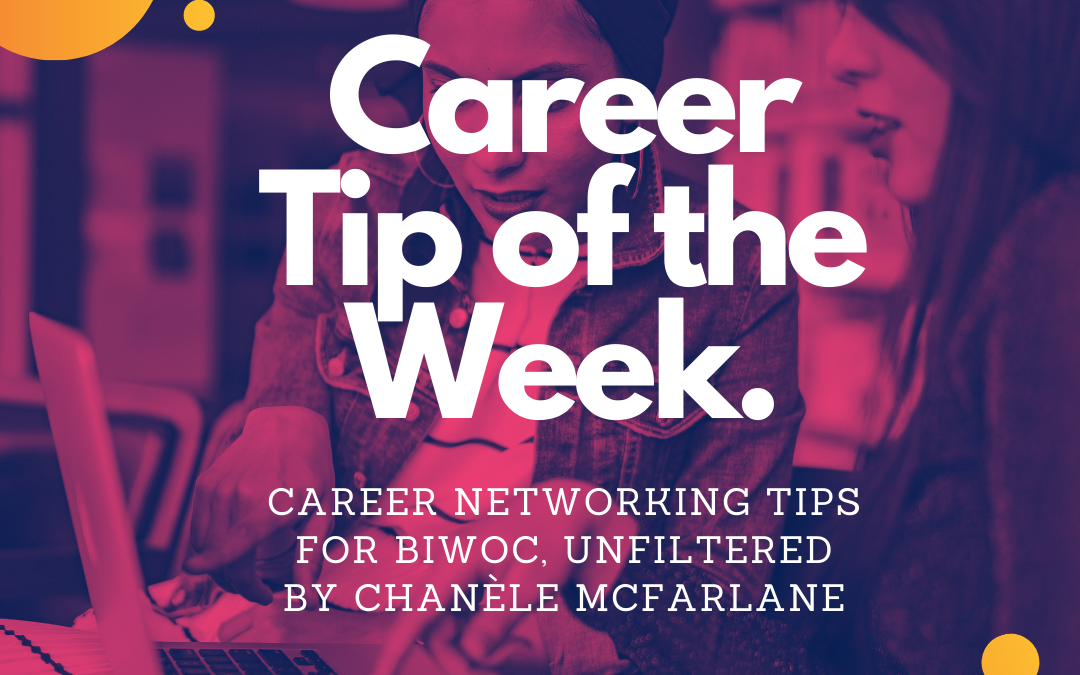 If I could go back and do things differently in my early-career, I definitely would have spent a lot more time building my network. I began to do a bit of networking in university and while completing my college post-graduate certificate, but once I started my first job, my only priority was working hard. I still wonder about the lasting impact it has had on my career.

I entered the workforce with the understanding that if I just keep my head down and produce exceptional work, I’ll be “successful.”

However, imagine my surprise when during a performance review at my first full-time, permanent job, I received this tough wake-up call from a manager. “You’re a very hard worker. You get everything done and I have no issues with that. But, you’re just not social enough and I feel like I don’t know you. You come straight in and sit down at your desk. You should consider spending more time talking to people in the mornings.”

In that moment, I learned that “working hard” isn’t the sole ingredient in the recipe for success. It’s also pivotal to build and maintain relationships with your professional network. Yet, in a study reported in Harvard Business Review, much less than half of the people of colour surveyed felt that networking was essential for their careers.

In addition to this, visibility in the workplace can feel a bit complicated. On one hand, we often stick out especially if we’re the “only” on our team or even within the entire organization. Yet, on the other hand, we feel invisible because we’re the only Black, Indigenous or racialized woman — and it can feel pretty lonely.

The problem is, remote work has made things more difficult. In this Idealist article, it was stated that people of color have become even less visible while working remotely, making it even more difficult to build relationships that will help their advancement. As highlighted in the New York Times, with fewer connections and less extensive networks than white colleagues to begin with, we can find ourselves more isolated.

Getting a promotion or some other career-enhancing opportunity isn’t just about doing the work and I absolutely learned this the hard way. This quote from Joy Fitzgerald, Chief Diversity and Inclusion Officer at Eli Lilly captures it perfectly: “To succeed, 50 percent is performance, 25 percent is perception and the other 25 percent, which is a force multiplier, is visibility,”

Essentially, if you don’t have strong relationships with the decision makers in your organization, you’ll likely get passed over. As uncovered through McKinsey’s extensive research on Women in the Workplace, the “broken rung” is the term used to describe the phenomenon where women, especially Black women and women of color, don’t get promoted as often as men. We typically fall behind at that first critical promotion to manager and this can partly be attributed to lack of access to senior leadership and other mentors and sponsors. However, if we do happen to get an opportunity to connect with these critical career advocates, are we taking advantage of it? How are you spending your “socializing” time at work or school? It is through more informal conversations that we have the opportunity to establish a strategic network of mentors, allies and more importantly, sponsors that can help you to reach leadership levels.

So, how can BIWOC ensure they’re still building strong networks, even in a virtual world? Here are 3 things to keep in mind:

This quote from a Harvard Business Review article captures it perfectly: “We’re just too heads down on our work, and we’re not doing the networking, which is hurting us. We’re not spending the time to build rapport with the people that are making the decisions about who gets the next job, who gets the next big opportunity. They don’t know us.” Take a moment to think about it: how many times have you found yourself eating lunch at your desk while working? What if, once a week, you used your lunch time to catch up with a classmate, a teacher, or a manager or colleague at work?

This same article shared a pretty startling statistic as well: 82% of people of colour participated in networking activities less than once per month. With less opportunities for spontaneous networking like chatting in the office kitchen, standing in an elevator or grabbing a coffee with a colleague, it’s on us to strategically carve out networking time in our calendars. It’s a good idea to schedule time to your calendar each week for a networking activity, which could include:

Don’t forget about your internal networks

When we think about networking, we often underestimate the value of the connections we have readily available to us at work (this could be an internship, co-op or first full-time position) or at school. Yet, these internal relationships with our colleagues and/or classmates, professors and staff are particularly important as since you’re working closely with them, they often become powerful advocates and references for you in the future. This is especially true for your peers. Don’t forget that they are all future decision makers within their fields and there’s no better feeling when you’re searching for a job and you realize you know someone at a company you’re applying for. Nurturing these relationships through regular virtual coffee chats should be a priority. Whether you’re in your internship, co-op or first job, here are the key people you should get to know:

The benefit of building relationships with all of these people is that you widen your network to typically include people who are above, below and at the same level as you. Senior-level executives aren’t the only ones who are influential as again, our peers also have valuable social capital that can open doors for us.

For many of us, just hearing the word ‘networking’ makes us cringe. It feels super formal, uncomfortable and intimidating. I encourage you to think about it this way instead: networking is simply building authentic connections. I know, I know. Easier said than done, right? Especially if you’re having conversations with people who are more senior than you. So once you book that virtual coffee chat or lunch, how do you actually lead an engaging and genuine conversation?

I know it may seem like networking is yet another item on our seemingly never-ending to-do list. Also, after spending most of our day behind a screen for work or school, the idea of even more screen time isn’t exactly appealing. However, with our careers in mind, it’s important to fit networking into our schedule. Even if it’s only for 15 minutes a week, your efforts will go a long way.