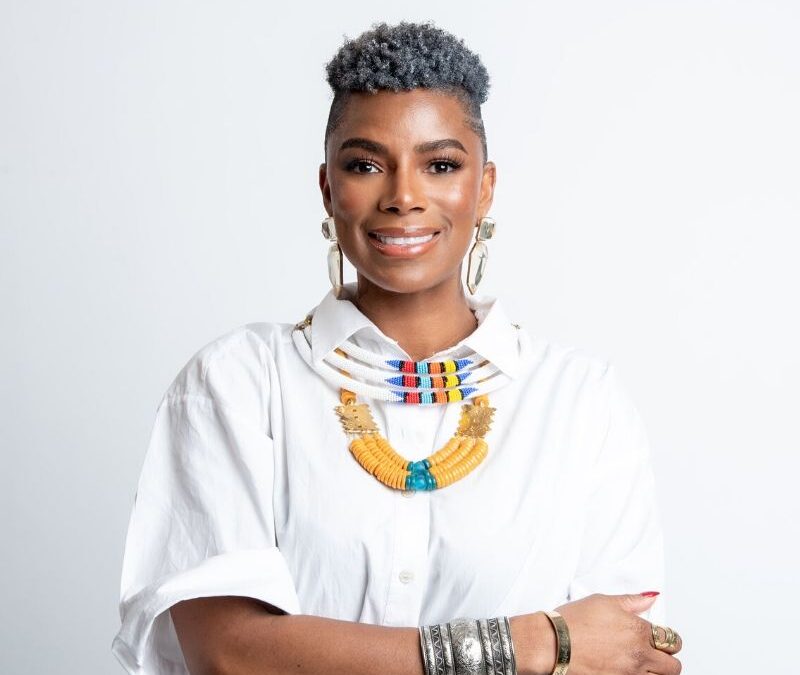 As we welcome Black History Month, we at Accelerate Her Future want to bring forth real voices from powerful Black women within our community. Our objective is to highlight their experiences, amplify  their voices and honour their calls for social change. These women have committed themselves fully to gender and racial equity,  advancing women, who look like us, dismantling structural and systemic barriers while leaving a powerful legacy. The first woman we’re profiling, Karlyn Percil-Mercieca.

As a young Black woman in business, it was an absolute pleasure for me to sit down with  Karlyn, CEO of KDPM Consulting Group and Founder of SisterTalk Leadership Academy. We talked about her experiences as a Black immigrant woman in business and her reasoning for creating an astonishing platform for change. My time with this powerhouse was riveting, as her answers were passionate, bold, real, and straight to the point.

Having done my research into Karlyn’s background, I began the conversation by wanting to hear more about her work as a leadership, equity, diversity and inclusion consultant “I help organizations create more inclusive and more equitable workspaces that work for all, especially for Black, Indigenous and people of colour,” stated Karlyn. How many times have you been in an environment that completely disregarded your capabilities because of your gender or the colour of your skin? Karlyn’s purpose is to help leaders in organizations recognize that we, Black, Indigenous and people of colour, and more specifically women of colour, deserve to be in the room with a seat at the table. “[This work] requires discomfort and a critical lens by those in leadership positions and those who carry the most power and privilege,” explains Karlyn. “I often say, systems don’t dismantle themselves, people do.”

As we dove deeper, I was curious about what motivated Karlyn to want to do leadership and equity work. Listening to her talk about her career in the financial sector, it felt like she wasn’t able to bring her full self to work. “Absolutely. When you’re having the experience, you think you’re the only one, so you hide it in shame. You don’t want to speak up, you don’t want to be the angry, troublesome Black girl,” reflected Karlyn. “And we can struggle and suffer in silence. But when I started to share what I was going through with one colleague and they shared it with someone else. From that one story, I had people coming up to me saying, “Oh, Karlyn, I too am struggling. I want to get rid of my accent because I feel like it is a determining factor when it comes to my career path and journey.” The more stories I received, the more horrified I became. So many of us were willing to discard so much of ourselves because we so badly wanted to belong.”

This is where she took her stance and said that there is no more suffering in silence and there is power in numbers. She took action by starting the first Black network in her company. Outside of work, she also created the SisterTalk group for women of colour. There is something so remarkable when women create safe spaces for one another, to allow ourselves to be no one other than ourselves. It changes the narrative from whom we think we need to be to succeed to accepting who we are wholeheartedly, unapologetically.

It was refreshing to listen to Karlyn on so many levels. She was open, honest and real about her past and her current work. From my vantage point, it certainly doesn’t appear to be easy  doing the work that she does, yet I’m deeply inspired by her stance to dream bigger and her bold mission to dismantle structures and systems that were not created for Black, Indigenous and people of colour.  I asked Karlyn about what has been the most challenging and rewarding part of doing this work.

“Let’s start with the most challenging,” she exclaimed. “The emotional burnout of doing this work. It is so emotionally taxing to talk about the elephant in the room without talking about the elephant in the room and having to self-edit is exhausting. Having to tiptoe or walk on eggshells because of White fragility is exhausting. Having to constantly advocate for human rights and your humanity is dehumanizing.”

Karlyn also reflected on the most rewarding aspect of her work, and that is to see Black, Indigenous and people of colour understand their narratives and take back their power while realizing the role external structures and systems play in shaping our internal narratives. “Sometimes we let imposter syndrome moments and personal narratives drive our behaviour. When we understand how our brain latches on to the negative stories, we can unlock ourselves from that and operate from a place of power.”

Given Accelerate Her Future’s mission and work with early-career women, I asked Karlyn her advice for students and recent graduates who self-identify as Black women and aspire to be leaders in different sectors. “Be aware of misogynoir and understand the impact it can have on our lives.” According to Layla Saad author of Me and White Supremacy, misogynoir was coined by African American feminist scholar, writer and activist, Moya Bailey and where anti-Black racism meets sexism, resulting in Black women experiencing oppression, marginalization and exclusion under patriarchy and White supremacy. Examples of anti-Blackness against Black women can range from derogatory and one-dimensional stereotypes and tone policing (i.e. as angry, sassy, strong) to our underrepresentation in leadership positions, mainstream media, as just a few examples.

“Remember that you are standing on the shoulders of giants [your ancestors] and are not alone,” claimed Karlyn. “I know sometimes it can feel like you are alone because you don’t see yourself represented or you don’t see the pathway that has been created for you, but as you go out there, remember organizations are lucky that they are getting you, it is not the other way around,” said Karlyn. “I know building your career or looking for a job can be stressful. But I want young Black women to know that there are millions of Black women rooting for you. We want you to win, and we’re uplifting you in our thoughts and prayers. So don’t try to do it all alone, build and reach out to your squad, and leverage them for your success.” Real talk!

My Reflections from My Conversation with Karlyn

My conversation with Karlyn has made me rethink some of the experiences I have encountered as a young Black woman entering the workforce. I remember showing up to interviews and immediately becoming uncomfortable because no one in the room looked like me. Each time I heard I was not what they were looking for, preparing for the next interview became even more dreadful. I began to subconsciously count myself out and became complacent. I figured I would have to get used to that feeling of not belonging to succeed. How crazy is that? Eventually, I reached out to my squad and began to realize these uncomfortable encounters and becoming complacent were not okay. Not with the ambitions I have for myself. I began to take the steps I needed to break free from the box I had placed myself in. I was successful in landing a job. And the biggest step I took to honour and acknowledge myself as a Black woman was to use my voice to ensure I was being acknowledged by others. It was not easy. It took time. I feared I would be labeled as the “angry Black woman”. But the more I began to stand up for myself and use my voice in rooms in which I felt the most uncomfortable, the more I gained confidence, and confidence gave me my power back.

As a young Black woman, I hope that this interview with the inspiring Karlyn Percil-Mercieca will provide other young, Black women with the courage needed to push past the discomfort, the imposter syndrome moments, and the uncomfortable feeling of thinking you don’t belong. Embrace the notion of showing-up as your full self .